Technically not shepherd’s pie, unless I sacrifice one of my lambs for the filling—if I were a shepherd. I’m a hunter, so am using a pound of ground venison from the fall muzzleloader season deer in the freezer. Maybe I should have called it Hunter’s Pie.

We had a scare that we might lose all the venison, pheasants, and grouse in the freezer because of a big power outage just after Christmas. After driving 8 hours home on the Monday after Christmas, we unpacked and settled in for a needed rest. At about midnight, while we were sleeping, a neighbor’s tree fell on the electrical wires and pulled over the attached pole, knocking out power to the whole street. By morning, the refrigerators had already begun to warm up a little, so we got bags of ice to pack in the freezers, but it was obvious that it wouldn’t really be cold enough to keep it all frozen. Would it stay cold enough to be re-frozen when the power came back on? When would it come back on? After it was clear the power would be off for a few days, we had to come up with another plan. My husband is a biology professor with access to a bunch of laboratory freezers, so we loaded it all in coolers and took it up to school. What a relief that was, because all that game represented not only a lot of work by our dog flushing out birds—do the math for 56 pheasants at 2 a day—but it represented all the lives we took during the seasons. So, it seemed right to have this first post after my holiday hiatus be a game dish. 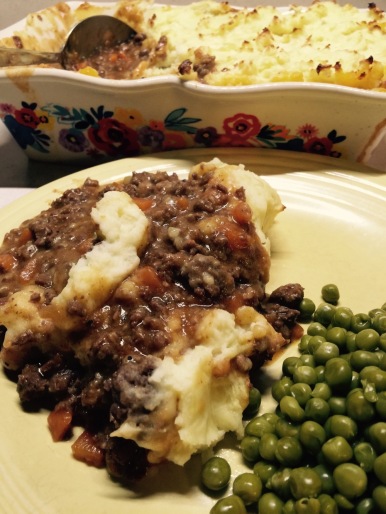 Shepherd’s Pie is all about the savory filling, which is traditionally made with lamb, but can be made with any red meat. I used 1 pound of ground venison (that dark red pile in the photo) and 1 pound of sage country sausage. The sausage did a lot of the flavoring in the dish, so that I didn’t have to create an herb combination; then the onion, garlic, carrots, tomato paste, and beef broth did the rest. I took the approach of a long slow cooking of the filling, as I would with the classic ragù meat sauce, which results in a very tender meat and a deeply rich sauce. Cooks often forget that ground meat benefits from a long simmer, just like other cuts. I simmered this filling for an hour before thickening it, and then simmered it for another half hour.

The rest is just a matter of making mashed potatoes and covering the filling up to the dish edges. My dish could have been a little bigger (or I could have left out a little of the filling), because it bubbled up at two corners, but I luckily had put the casserole on a half-sheet pan, so there was no oven mess. What a terrifically rich and comforting dish in this winter that has finally arrived.

*I should have noted that I can’t stand the idea of peas in the pie, so we had them on the side.