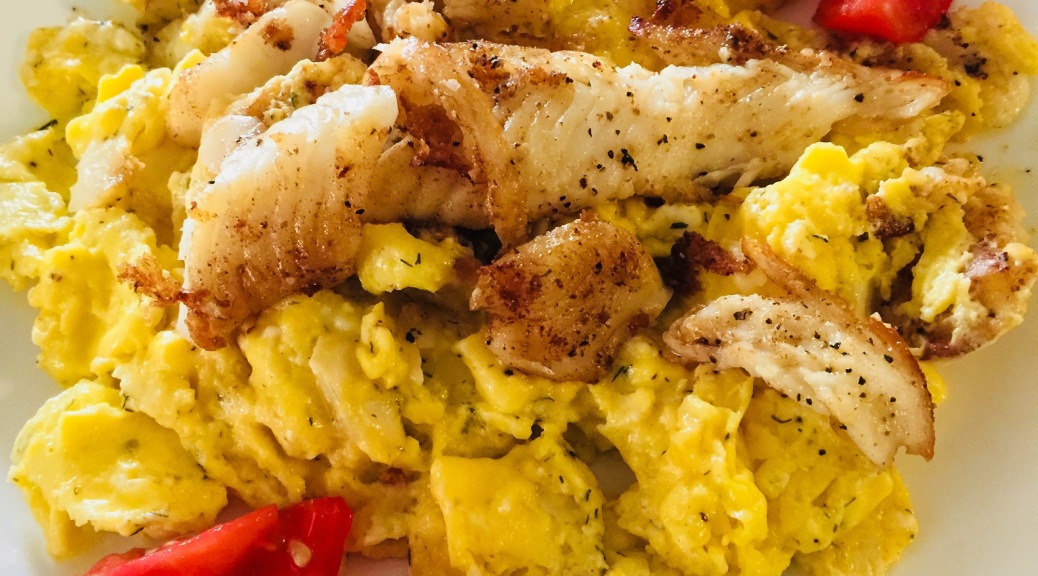 I may never eat scrambled eggs again without cream cheese!

Even though the fillets were small at less than 3 oz, each, two were too many for me, and three eggs was too much. Still, I persevered 😉 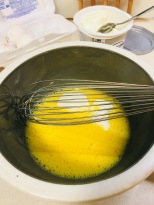 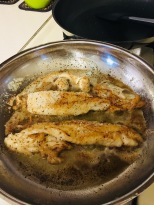 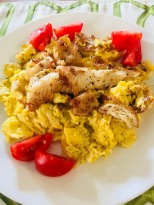 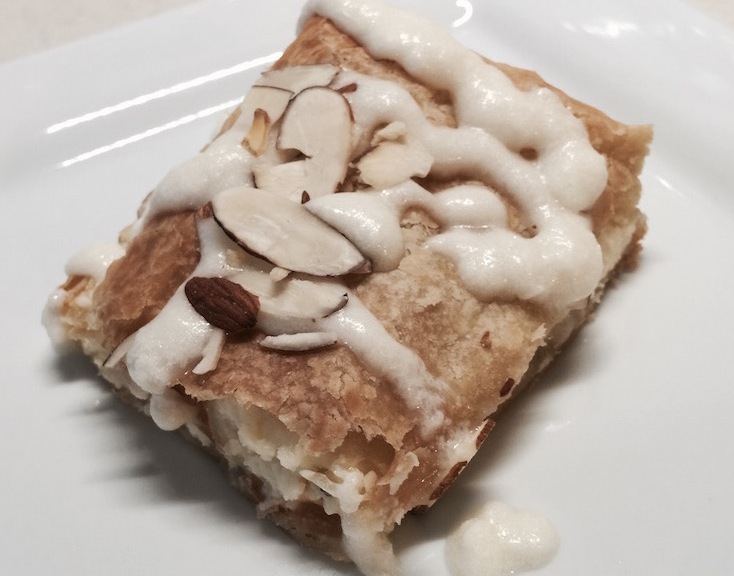 A few weeks ago, I tried the popular web recipe for Cream Cheese Squares and I noted that I thought they were overly sweet. Here’s my original post with a link to a video of the original recipe. I also suggested some other ways to improve the recipe, and here’s a much better version that is closer to a cream cheese danish, but still in bar form: 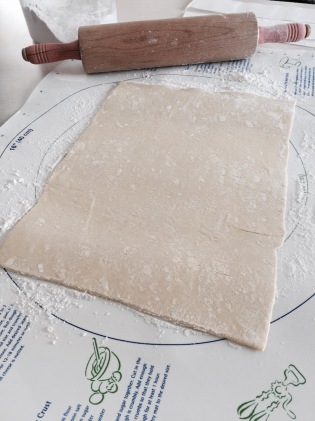 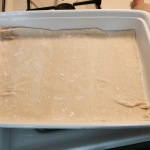 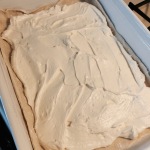 Edge of layers and filling

With icing and almonds

1 tablespoon milk, half and half, or cream 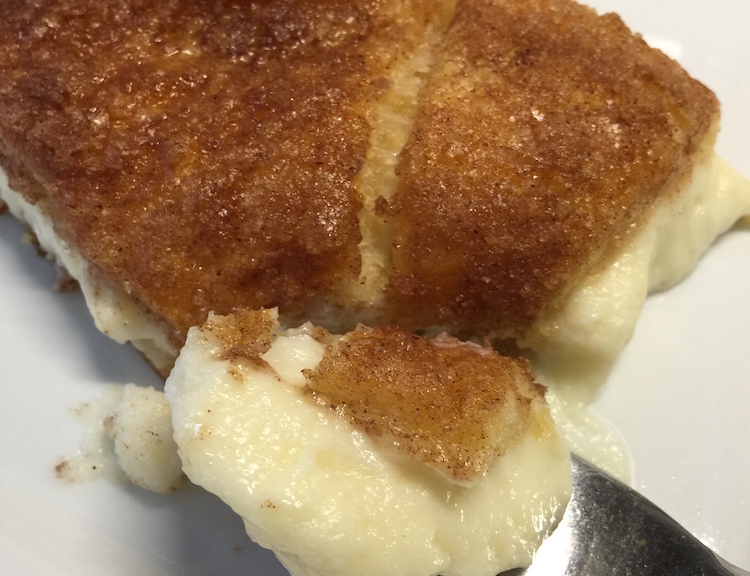 Here’s a video for a quick dessert using packaged ingredients.

It’s simple enough that you could add to it and make it your own. I love a cheese danish as is, but fruit or jam in the filling would be interesting. I’ve seen versions of this recipe on a number of websites, but they all skip the last step of the melted butter! Who would skip melted butter? Personally, since I am more than a little addicted to cinnamon, I really like that part, too. Some other ideas:

I still say it’s too much sugar, especially with the cinnamon sugar sprinkled on top. When I make it again, I’m using only 1/2 cup sugar in the filling, and adding an egg to it. Without the full amount of sugar, the filling could be runny without the egg. I try not to eat a lot of added sugar, despite what you see posted here, and this dessert gave me an instant headache—that’s how I know when the sugar is too much. Other than that, it was easy to make and would be a good family dessert. I’m going to walk it off on the treadmill, now. 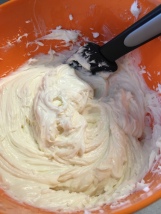 Baked and crisp on top 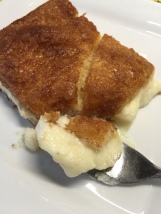 Optional: 1 large egg with the lesser amount of sugar

The bars need to cool for about an hour and may need to be refrigerated to eat by hand. I recommend this recipe for both taste and ease of making, and for the ability to adapt it to a variety of taste options. 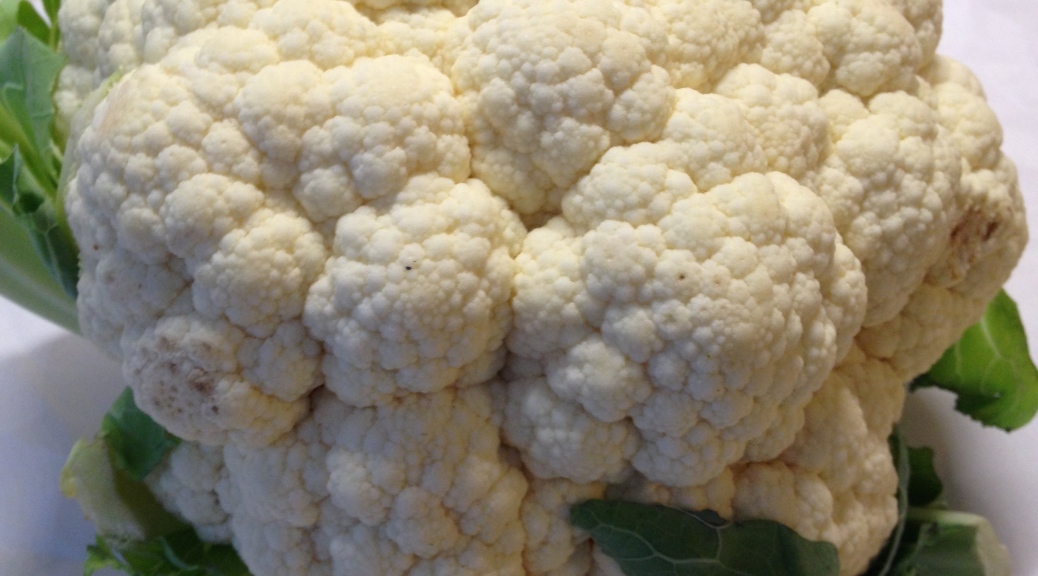 If you try to avoid carbs in your diet, and especially that ridiculously high-glycemic white potato that is right up there with pure sugar, you are probably familiar with cauliflower as a low-carb substitute for potatoes, especially mashed with a little cream cheese, in place of mashed potatoes. Cauliflower also works in casseroles and gratins as a potato substitute, and that’s what I’m making here. It’s not low fat; it’s not low calorie; it’s not without dairy; it just avoids some of the high carbs of potatoes. For me, the fat and dairy, and even the calories are not so much a problem, but if they are for you, you might want to use lower fat varieties of the dairy products and lean ham instead of bacon. 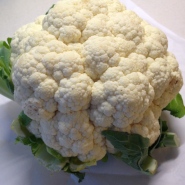 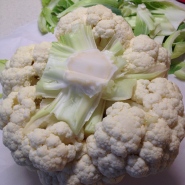 Tear off leaves, but not core 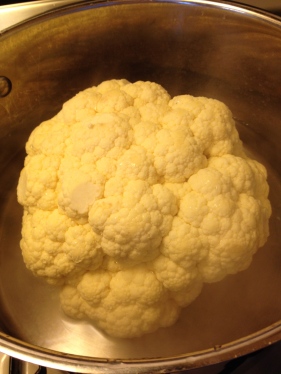 With bacon and green onions

covered with sauce and cheese

I did not think the finished dish needed salt.

You are at my cooking blog. If looking for something else, check out the "My Blogs" list.