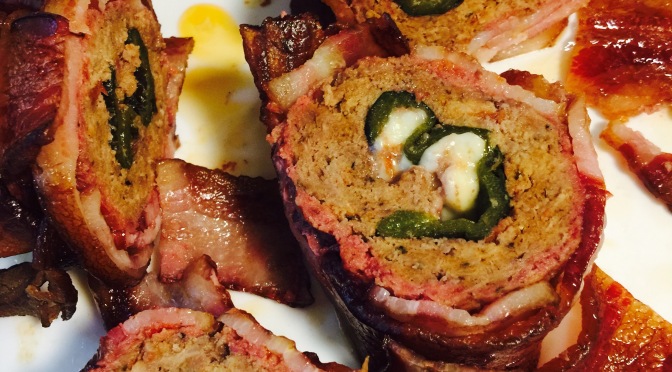 I was trying to think of what to stuff in this mini bacon-wrapped meatloaf, and then my husband brought in a bunch of poblanos from the garden. Usually I stuff the poblanos with meat and cheese, so it was just a matter of turning the whole thing inside-out. Traditionally, you wouldn’t use bacon with stuffed poblanos, but I didn’t expect the stuffed poblano police to stop by, so I didn’t worry about it. Smoking takes time, and ground meat needs a fatty buffer, like bacon, to keep it moist during the longer cooking. It took about 2 hours to smoke to the point that a little cheese started to melt out of one end, and a thermometer registered 165º-170º in the center (of course, the center was pepper and cheese).

I only used 1 lb of ground meat for the two of us, and there were still leftovers. You’ll have to consider how much to make for your group. Usually, for example, I would use 1 lb of ground meat to make four burgers, and we would have one left over. Personally, I prefer less than a quarter pound for my burger, but I’m probably unusual. You could make several of these rolls for a larger group of people. I cut our one roll into six thick slices.

I made a woven mat of bacon to wrap the filled meatloaf in, using my favorite local thick-sliced bacon. It’s very thick and so you can’t stretch it like the typical thin commercial bacon. I made the mat 6 strips wide, but had to add partial pieces into the weaving to make it fully woven. I’m not sure you can see those half pieces in the photo. After wrapping the roll, I sealed the edges with another strip and put that side of the roll down on the grill grate. I didn’t worry about having beautiful ends, but I did pinch the rolled meat together to hold in the cheese for as long as possible. I wrapped it all tightly in plastic and refrigerated it for about an hour to try to convince it to stay in that nice loaf shape. The lesson here is this: Don’t fret about the appearance too much. Just take your time and keep handling it until it all seems to hold together. Believe me, the gorgeous smoked bacon on the outside and the gooey cheese on the inside will overpower any construction flaws.

About half way through 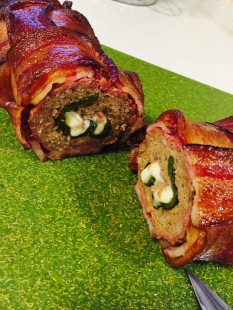 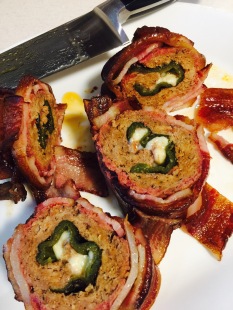 I ended up burning only 1/3 of my charcoal snake, so today, I’m smoking some ribs with the remainder. 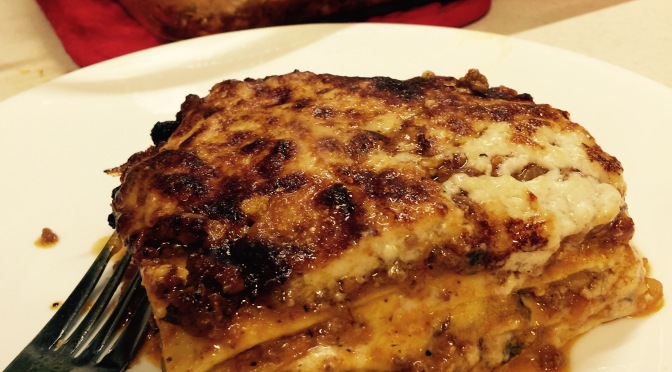 The first dish from the buck my husband harvested this fall.

This lasagna is a tale of two sauces—a bolognese ragù and béchamel. Neither sauce is difficult to make and the ragù in particular can be made the day or evening before to simplify the final dish preparation. This lasagna doesn’t require all the cheese (ricotta and mozzarella) of typical lasagna recipes, just finely grated Parmigiano Reggiano on each layer, so that the result is a lasagna that is not quite as filling—and by filling, I mean overfilling. You can certainly use the ragù in a typical cheesy lasagna, but I think the béchamel would be overpowered by all that cheese. Ordinarily, I would add cream and butter to a bolognese ragù after the long simmer, but felt that the layers of béchamel provided the necessary creaminess to the dish.

Two things I did differently:

I used fresh pasta sheets available at my grocery to construct the lasagna; you don’t need to boil them first as they cook in the casserole to just the right tenderness—just make sure you have plenty of sauce to cover. 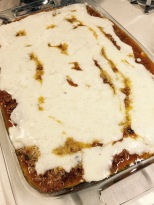 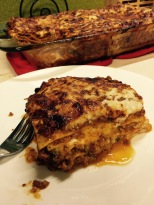 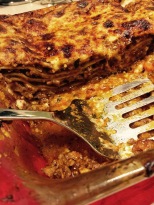 Note about salt: There are lots of ways to get too much salt into this dish. There is salt in each sauce, your chicken stock may be salted, the bacon may be salty, and authentic Parmigiano Reggiano cheese is salty. Personally, I would leave out any extra salt in the ragù. Taste as you go along.

Preheat oven to 375° when ready to construct the dish. 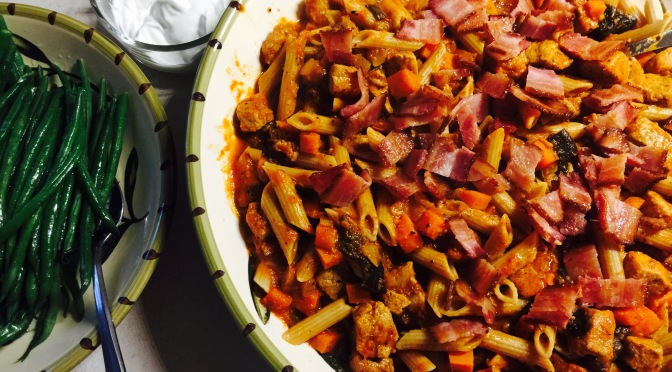 Quick, because I’m using pork tenderloins instead of a cut that benefits from long cooking, like a pork shoulder. In fact, after browning the tenderloin cubes, You only add them to the sauce at the last minute before serving.

One of my freezer packs of tomato sauce was marked “tomato-pepper” because one day I had a bunch of bell peppers harvested on the same day as some tomatoes. So, instead of roasting the tomatoes with carrots and onion and garlic, I roasted them with the peppers and it all went into the blender. I’ve been waiting for the right recipe to use them. You will have a chunkier sauce if you are using fresh chopped peppers in your sauce. I’m also going to add two chopped red poblanos which may add a little zing (who ever really knows about poblanos?), and I’m marinating the pork cubes in smoked paprika for a smoky pepper taste. Our ripened poblanos turned a dark purplish-red; maybe you can pick those out  in the image of roasted peppers from one of my roasting days: 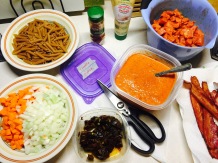 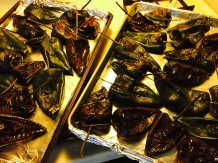 Can you pick out the red ones? 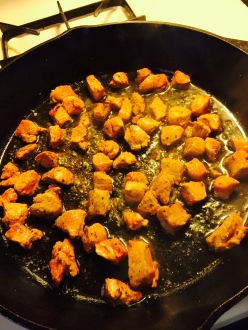 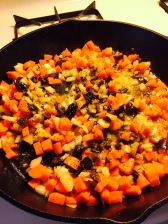 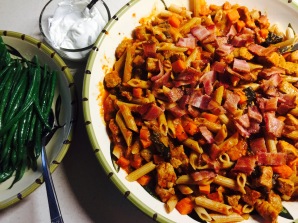 If my husband weren’t lactose intolerant, I would stir in 1/4 cup sour cream at the end. Instead, I’m serving it on the side. 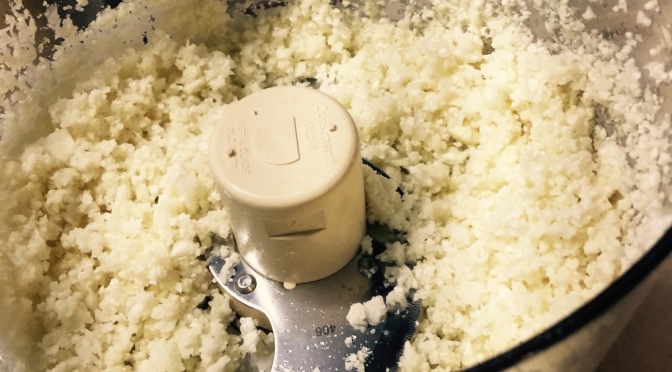 If you can believe it, I was out of bacon fat! So I had to cook up some bacon and decided to throw it into this dish—that was not a hard decision. I thought about making the cauliflower with coconut oil and other flavors that better reflected the Asian marinade on the chicken of the previous post, but the bacon was calling to me.

Usually I use cauliflower to substitute for mashed potatoes, which are pretty close to eating white sugar in terms of the glycemic index. Cauliflower mashed with cream cheese is a great dish that even my potato-loving husband likes. We’ll see how he feels about the cauliflower rice. There’s a quick video on this page at The Kitchn that shows how easy it is to make.

I used 2 tablespoons of bacon fat to briefly saute the cauliflower over medium heat, before covering the pan with a lid to steam for about 10 minutes, with the chopped bacon already added. I did not try to brown the cauliflower, but that’s an option. In the end, it was a nice dish with the grilled chicken, but it sure makes a mess when you cut up the raw cauliflower before you get it into the food processor. You end up finding those little gritty specks everywhere—just a warning if you’ve never cut up cauliflower before.

You are at my cooking blog. If looking for something else, check out my other blogs in the "My Blogs" list.