First, I have a hard time calling Memorial Day a holiday, having had a parent die in a war, but while it’s not all fireworks and getting drunk around here, I do make food like I would make for any seasonal celebration.

Since there are just the two of us here, I can’t justify making a feast like what a big gathering might have, so I’m making three good meals and spreading them out over the three days of the long weekend. Yesterday, we had potato salad—a big favorite around here—with a grilled venison backstrap. No dessert, because, well, we think of potato salad as dessert, itself!

Tomorrow, it will just be your typical grilled burgers with skewers of grilled summer squash, your choice of yesterday’s potato salad or today’s slaw, and a little leftover dessert from today.

Today, I’m grilling some baby back ribs, brined in an orange-Asian marinade and basted with a spicy orange-Asian glaze. Cole slaw for a side and for dessert, a blueberry clafoutis. The ribs are not going to be like the last ones, cooked low and slow with a charcoal snake, but cooked over an indirect higher heat, around 350°-400° for two hours, periodically basted with the glaze. They are more of a wet rib, but one that doesn’t require a thick drippy sauce. The glaze cooks down to a thick, sticky coating that complements the marinated pork. 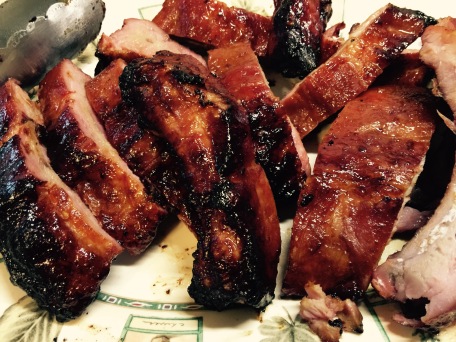 Baby Back Ribs with Orange-Asian Glaze

Combine all ingredients and pour over ribs in large glass dish or in sealable plastic bags. I cut my rack in half and put each half in a plastic bag, dividing the marinade between them. Marinate in the refrigerator overnight, removing from refrigerator about 1/2 hour before cooking.

After orange juice is reduced by half, remove to a measuring cup, then stir in other ingredients. Use to baste the ribs every 15 minutes on the grill.

The ribs were moist and tender inside, sticky and spicy outside, without any added sugar, just the natural sugars in the orange juice.

Blueberry Clafoutis: See the recipe for Pear Clafoutis and substitute one pint of fresh blueberries for the pears.