Long ago, I posted my traditional method of making chili, whether with venison, beef, or a combination of the two. I use two pots on the stove, cooking beans using a quick soak method in one pot, and cooking the meat in another pot. Between the pots, I share the flavoring base of reconstituted ancho chiles, onions, garlic, and spices, and then I combine the pots into one for the last hour of cooking. It’s not as complicated as it sounds, and I just do it all from habit. Actually, I consider it a really easy dish to make. Of course, I usually made too much for the two of us, and I’m paring down the ingredients in lots of my old recipes, like this one.

Recently, I tried to adapt the recipe to my new slow cooker, first soaking the beans overnight, which I never do with the quick-soak method. It turned out okay, but it seemed too wet, too soupy, and beyond using more water than needed, I’m not sure why that happens in the slow cooker. I’ll probably fool with the recipe in the winter to see if I can make it work out right. Or I’ll just go back to the two pot method on the stove.

It’s almost too warm for chili, now, but I thought I’d try it out in my cast iron Dutch oven on the grill, since after all, it’s the traditional cowboy chuck wagon meal to cook over a fire. Now I can see why it’s such a beloved campfire dish.

This might be the best chili of all time, really thick and rich with a deep red color that I never get on the stove.

I have a Weber® Master Touch® grill which has a removable insert in the grate for using cooking pieces, like the chicken cooker or griddle, or like today, a cast iron Dutch oven. To make indirect heat around the center, I made a 2 x 2 charcoal snake, one that usually last 6-8 hours, not knowing how much time I would need. As it turned out, 3 hours was enough, and as you can see in the images, I only needed half the snake. I simply separated the two halves at the end, saving the unburned half for the next day’s grilling. 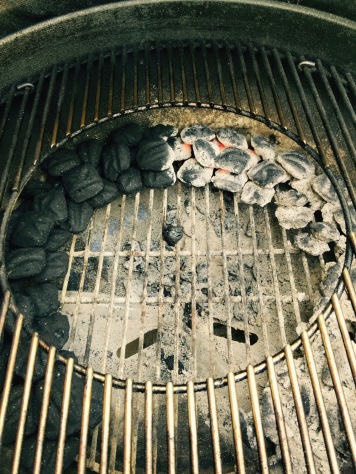 Browning on the stove 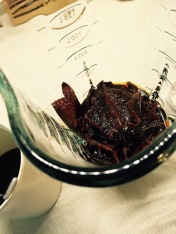 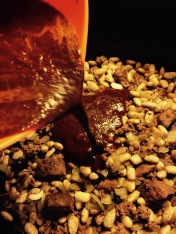 Adding sauce to the chili

Venison Chili on the Grill

2 lbs venison, in both cubes and ground, or the same in beef/pork

Once you get it on the grill, you have 3 hours to do nothing, or I guess you could make some cornbread.

One thought on “Venison Chili on the Grill”