In this recipe, I’m referencing two posts  from about one year ago that covered the making of pizza dough and the final pizza. The dough really is terrific and I recommend it:

I always make this pizza with a Parmesan white sauce, but now my husband thinks he has gone lactose intolerant, so I’m trying to cut down on too much milk or cheese in any one meal. We’re still going to have some cheese on the pizza, but I needed to figure out a tomato sauce that wasn’t too acidic—we’re not crazy about those rich tomato sauces that border on sour. Problems, problems, problems.

I started with a large can of whole plum tomatoes, strained out the liquid, to be used to flavor another dish, and pulsed them in the food processor with about 6-8 cloves of roasted garlic, olive oil, salt , and a little dried oregano. I’m hoping that by not precooking the sauce, it will be lighter instead of concentrated. It seems pretty thick, already, for a raw sauce, and still retains some of the texture of the tomatoes. I’ll miss the white sauce, but I hope this is a good alternative.

In my opinion, the crust is the star of pizza, anyway.

Other than the sauce, I’m using the same toppings that we like—country sausage and roasted bell peppers. Since I put oregano in the sauce, I’m leaving out the arugula that I like on a white sauce. I’m going light on the Parmesan and mozzarella, but can’t leave them out completely. The lactase tablets will have to get him through that. 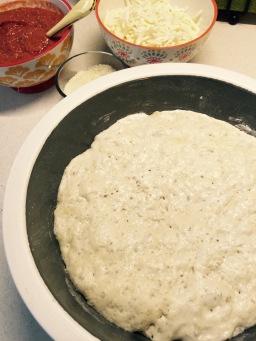 Dough on the second day 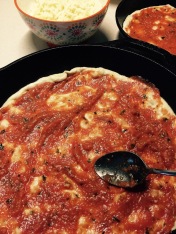 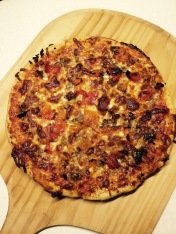 I large 28 oz can whole plum tomatoes, strained (San Marzano tomatoes, if you can find them)

This is a light sauce that doesn’t overpower your other toppings—it was just what we were looking for (even though I still prefer white pizza sauce).