I’ve written a little about my past sourdough bread baking period when I wrote about my favorite bread cookbook. If you didn’t see the post, you can read it here: Cookbook: Breads from the La Brea Bakery. Every now and then I get the urge to make bread and I’ve been planning to try the recipe for ciabatta for a while, because I love breads made from a wet dough that end up all crispy on the outside and full of big holes inside. I used this ciabatta recipe from The Kitchn and wasn’t disappointed. It’s not a sourdough bread, but it does use a biga, which is a preferment mixture of yeast, flour, and water; it just doesn’t ferment as long as a sourdough starter. Left overnight, it becomes a gummy, bubbly addition to your dough, with more yeast and water and flour (and salt). It does work a little like sourdough in giving the resulting bread a chewiness, so I guess I would call it a wannabe sourdough starter.

The other thing I like about working with wet doughs is the feel. They are soft and puffy like a pillow after rising and refuse to be neatly shaped. You can corral them a bit with flour and a dough scraper, but you have to be relaxed and unconcerned about misshapen rolls and bread loaves. When I see ciabatta rolls that are perfectly square, I get concerned about quality. Sometimes the ones at the grocer are a little too chewy and dense, too.

So, here’s the biga when first mixed, like a lump of dry paste, and 24 hours later, all bubbly and sticky. 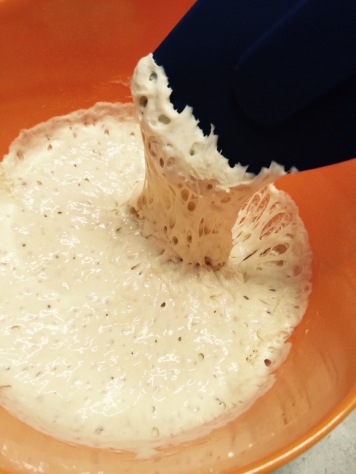 When you stir the biga into the rest of the water, flour, and salt, it still looks rough before you beat it. Beating it for 10-15 minutes creates a smooth, shiny dough. Then you let it rise in the bowl.

Biga mixed into the rest of the ingredients

Smooth and shiny and wet after mixing 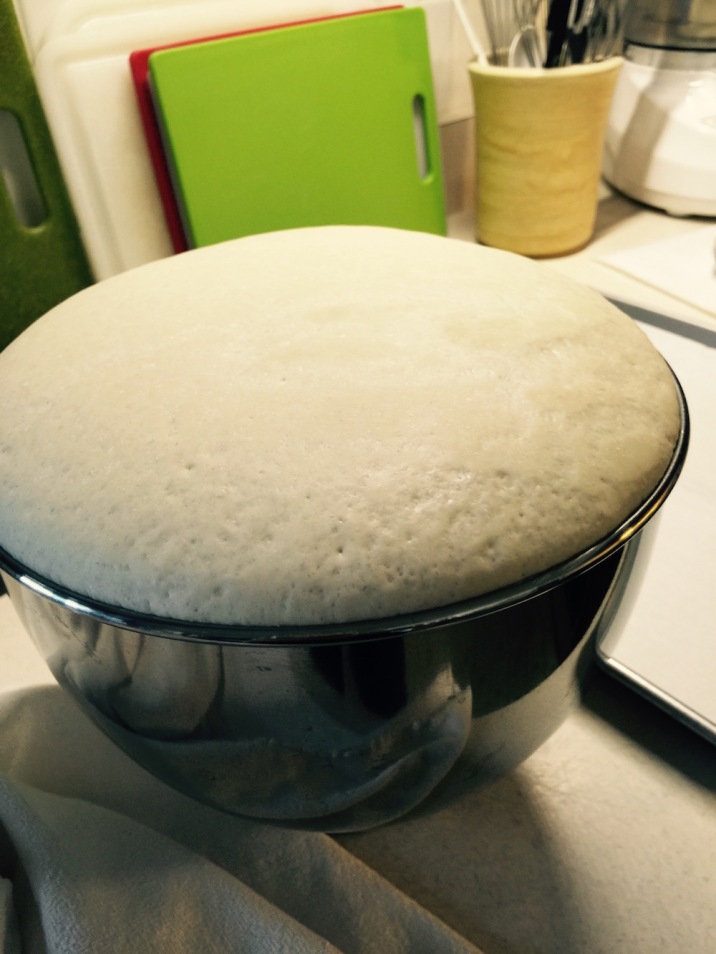 Risen and ready to shape

I just let the dough rise in the mixing bowl without oiling it, because I didn’t want oil on this dough; I wanted it to have a drier feel when I’m trying to shape it. It’s not a dough that you punch down and work much to shape. Wet doughs should be handled lightly. So, I just poured it out of the bowl after rising onto a floured mat, then I folded it over into thirds to make a long rectangle. At that point I pushed it lightly into a little wider shape to get two rolls of rolls. I pushed my fingers into the dough to press some, but not all, of the air bubbles out. Then I used the dough scraper to trim the edges and cut out mostly square shapes. Some resisted being square, but they were close enough. Then I gently, with my hand and the floured scraper, lifted them onto parchment lined baking sheets. the dough wants to stretch and flop a bit, but just handle carefully and don’t worry about it. Just drop it, if you have to, and let it puddle into a shape.

After pouring out the dough

Cutting and shaping the rolls

Then after baking, all the worries are over, because they rise up nicely with a crisp crust on the outside and a soft center with big holes. We ate a few with hamburgers, but they would be good with many fillings or just as is with butter.

The recipe is here, with its own nice gallery of photos: http://www.thekitchn.com/how-to-make-ciabatta-rolls-and-bread-at-home-baking-lessons-from-the-kitchn-159913