So, here’s my experience with wings. I have seen wings on the whole chickens and turkeys I’ve cooked. That’s it. I have never cooked wings, never ordered or eaten wings in any of the dives in which they are popular, and, frankly, have never held much of a good opinion about them as food. I always figured they were developed to sucker drunks into spending more money for nothing but bones and skin. But here I am with 5 pounds of whole chicken wings, which turns out to be 15 of them, just to see what happens.

I don’t really care for the super sugary or vinegary barbecue sauces, so I figured I’d start with beer again, and work from there, since it works so well when I marinate whole chickens. I do like Mexican sauces made from reconstituted peppers, especially ancho peppers, so I made up a marinade that is pretty much like my enchilada sauce, but with lime juice instead of vinegar, a lot more garlic, and then the bottle of beer. Half of it went to marinate the wings, and the other half was cooked down a little for a basting and serving sauce.

One thing I refused to do was to cut them into pieces and cut off the pointed tips to discard. Aesthetically, I think they look better whole, and I don’t see why the tip can’t be used as a kind of handle. Let people break them apart on eating, I say.

They turned out well, easy to cook, easy to keep the heat moderate (250°-350°), and my husband declared them good, eating 9 whole wings. I ate 3, and, oh, here’s the other thing—I hate to get my fingers messy when I eat. 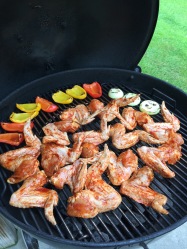 Set out over direct heat 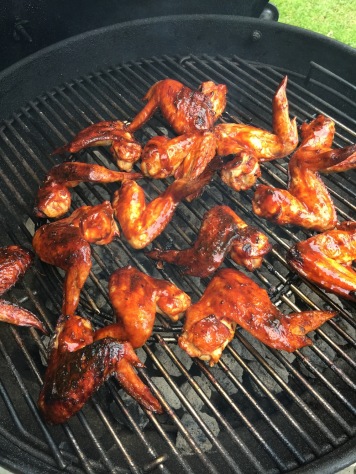 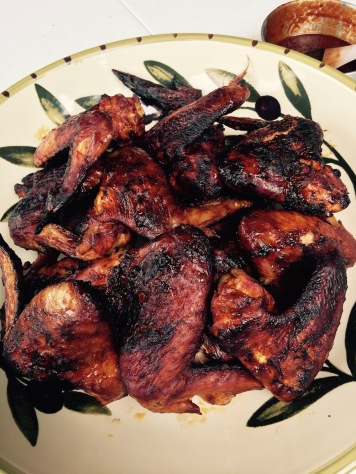 My marinade makes almost 4 cups, so you could do many more than the large 15 whole wings that I did.

1/2 teaspoon ground chipotle (more if you like it hot)

They are really easy to make, but, unfortunately, messy to eat. The rice was great.

One thought on “Grilled Chicken Wings with Beer-Ancho Marinade”