So, I asked, “Do you want some kind of a dessert for the Fourth, something with fruit, berries, maybe whipped cream or cream cheese?” And he says, “Yeah. Coconut cream pie.” What? Not the kind of fruity, easy to throw together dessert I was imagining, but coconut cream pie it is. Next time I won’t ask if I’d rather make something else.

I really like this recipe for “Classic Toasted Coconut Cream Pie,” because it uses all coconut milk as the filling liquid, where others usually use a combination of coconut milk and cream or half and half, and some don’t use coconut milk at all, which I do not understand. I also like that it calls for unsweetened dried coconut, so you know exactly how much sugar goes into the dessert. It’s a wonderfully creamy pie that is sweet enough, but not cloyingly sweet. This time around I even made her pie crust, a butter crust, and the whole thing turned out great, even if two of my pie shell sides tried to collapse.

Follow the link above for the recipe, but here’s what I did differently. 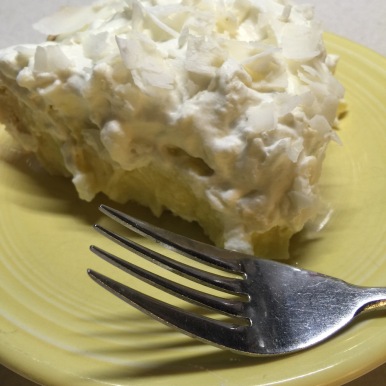