Update: my husband said it was tasty, and I’ll take that as success.

I’ve never seen nor tasted a chocolate babka or any other kind of babka, but when I looked it up recently and saw the photos, I was intrigued. Now, this may turn out to be like the puff pastry I made only once, or it may inspire some variations—like without chocolate, which readers know is not my favorite flavor. The eggy, buttery dough, basically a brioche dough, appealed to me, even with the chocolate, so I didn’t think I would be disappointed.

I made it exactly like this recipe for “Better Chocolate Babka” from Smitten Kitchen, although I may not have rolled it as tightly as needed, since it seemed a little loose and wanting to fall apart after trying to cut it after baking, but rolling filled dough, as in for cinnamon rolls, can be fraught with problems. It looked pretty good in the pan after my attempt at twisting it and better after rising and baking—you be the judge from the photos—so I think I did it right. If I made it again, I think I would try the traditional method in Martha Stewart’s offering, where you just roll it up and twist the heck out of it without cutting it to open the layers. Still the open layers did make for an interesting look.

But that brings me to whether I will make it again, and I think that’s a No. The chocolate really disappointed me, seeming bitter and dry, and well, just too chocolate. If I make anything like it again, I will make the cinnamon filling or something savory. Can you make a savory babka? I don’t even know the meaning of the word, but I won’t waste a nice brioche dough on chocolate again. I’m not sure what the big appeal is of this bread. My husband, the chocolate lover, looked at it and said “It’s Bread?” leading me to think he won’t be eating much of it. I think he thought it would be a cake.

The dough handled nicely and was easy to roll out thin; the chocolate filling came together as instructed and spread easily. Setting the rolled dough in the freezer for 10 minutes did work well for cutting it before twisting, and eliminating the nuts, as the recipe notes suggested, probably kept the layers from falling apart in the twisting. Maybe it came out as it should have, but that chocolate just did not hit the spot for me. I didn’t take many photos in the making, but the finished loaves look pretty good: 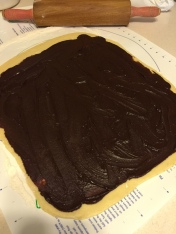 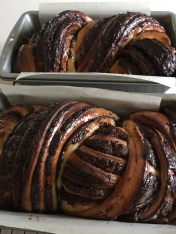