I used two recipes to make these buns:

I started making these on Saturday, but then you have to chill the dough for at least 12 hours or up to three days, so I had time to think of what to do with the dough. Cinnamon rolls or sticky buns came to mind, of course, but I don’t really need to eat desserts too often, so buns for sandwiches seemed like a better idea, and really, brioche, that buttery, eggy sweet dough, makes a sandwich that’s practically a dessert, anyway. I didn’t figure out until Sunday what the sandwich filling would be, but ended up with pulled pork for a little southern barbeque meets French pastry. It was a good diplomatic pairing. We ate three buns for Sunday’s dinner, and then I cubed and froze the rest for a later bread pudding.

I used the instructions and ingredients exactly as stated in the recipe for brioche dough found on Epicurious, but I have a few suggestions (in the recipe) to make it go a little better for you.

All brioche doughs use eggs and butter, but this one uses a lot—3 eggs and 1 1/2 sticks of butter! It works, but I think you need a stand mixer to get all the butter incorporated. I would not have tried it with just a spoon and arm power.

Just mixed and scraped down 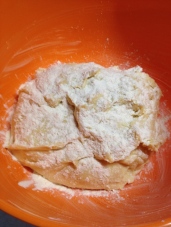 Punched down to refrigerate 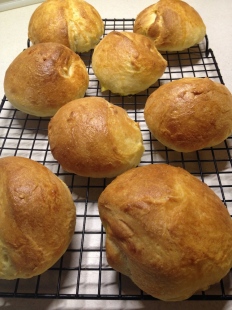 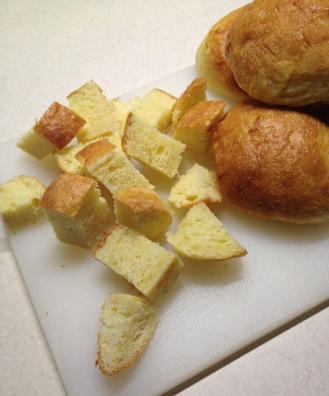 Don’t plan to make and eat these on the same day unless you rise very, very early:

Resting in refrigerator minimum 12 hours or up to 3 days

The recipe at Epicurious is just for dough; it does not give instructions for making buns or any other recipe. You can make this dough and then experiment with how to use it or find any number of recipes with specific instructions. I followed directions on how to form and bake the buns at The Clever Carrot, even though my dough was much richer.

*I suggest using only 1/4 cup flour in this starter that has to sit for 1 hour, because, contrary to the instructions, 1/4 cup of liquid and 1/2 cup of flour does not make a soft dough. It makes a hockey puck that does not soften or spread over the rest of the dough, as per the original instructions. Add the other 1/4 cup to the dough ingredients below. You can see in my two photos here that the original starter mixture has too much flour, and that even though my heavy duty mixer eventually incorporated it, it is clearly too stiff to work as directed.

Soften the yeast in the sugar and warm milk for about 10 minutes, or until foamy. Stir in 1/4 cup flour, reserving the other 1/4 cup for the dough below, and allow to rest, covered, for 1 hour. The original instructions say to cut a deep x in the small ball of dough, but it did not have any effect for my dough, which never softened much, even though I put it in a warm place. When I make it again, I will follow my own suggestions and hope for a softer starter or I may just incorporate the starter ingredients in the dough without waiting the extra hour.

Forming and Baking the Buns

I allowed my dough to come to room temperature in a warm place, first, to have a more malleable dough to form into buns.

The photos at The Clever Carrot© are invaluable for forming the dough, so please go there to see them: http://www.theclevercarrot.com/2013/05/light-brioche-hamburger-buns/

Although the dough I used had different amounts of ingredients, it worked exactly right for eight buns. I cut the dough into eighths with a bench scraper and used the method described to flatten each piece and then draw up the edges into a little purse, then turn over and roll into a nice round. It worked very well, even though mine are not as perfect as the ones at The Clever Carrot©.

Bake for about 15 minutes.

I was just thinking these buns would make great breakfast sandwiches, too, with fried eggs and sausage.

One thought on “Brioche Buns”